Monday: A few days in Barcelona seemed a good idea now that Covid restrictions are lifted. We drove away from Skillinge in bright sunlight and 10 degrees. At the parking, in Kastrup, it was 12 and sunny. We entered the terminal to be greeted by a demonstration. A group of young people sat on the floor holding placards saying “there are no green flights” and a very good choir sang. It was a gentile protest that was more likely to provoke feelings of guilt than tying themselves to the plane wheels.

The SAS flight was comfortable and on time. From the airport, we took an Airbus to the center. On board, we were forced to wear face masks but not on the flight or in the street. We wandered to our hotel with too many clothes for the prevailing 22 degrees and sun. A little sweaty we checked in to Del Mar. Our room was OK.

In the evening we wandered to the harbour and saw obscenely opulent boats parked in a row. People still sat on the beach or played volleyball, but no one was in the sea. A Tapas restaurant was found and we ate outside in a small square which was crossed or crisscrossed by a varied collection of residents sometimes bizarrely clad and often carrying bails of toilet paper from the local supermarket. The Tapas were superb, especially the Gambas Aijla. We stopped for coffee and then wandered home to our hotel very satisfied with our day.

Tuesday: Breakfast was quite good in both selection and quality. A middle-eastern couple arrived with their two charming small girls. The youngest did not want to sit in a child’s highchair until the father was called to insist. He disappeared to collect his breakfast, returned and began to eat enthusiastically. Mother left to collect food for the children and herself which revealed that the eldest child had a penchant for sweet cakes.

The old town was on today’s agenda. Tall elegant buildings in narrow streets hid spacious shops selling a plethora of merchandise behind graffiti-covered shutters. Elegant doors despoiled by a wannabe artist’s pubescent ego trip. Wandering Americans’ verbal infancy with their “like” punctuation. There was much to be sad for but the sun, Rioja and Pintxos saved the morning. An impressively tasty display of Pintxos was served by a talkative and ineffective waitress. A sign hung over a narrow pedestrian street imploring passers-by to be quiet and let the resident’s sleep. The diversity of feelings invoked by the contrast from ugly to sublime is invigorating

Anna’s Google research revealed that last night’s tapas bar was nominated as the best in Barcelona in 2007. It has aged well.

This afternoon we walked to La Pedrera, a Gaudi designed apartment building. It is impressive and beautiful. The walk took us up a broad avenue with all the expensive brands lined up one after the other, Dior, Cartier etc. We passed the Cathedral which had a large Christmas tree with shiny red balls and a small Christmas market in front of it. It was not due to the council’s amnesia but is in fact a film set.

Short skirts and shorts I remember from the Twiggy era. The fashion has returned to Barcelona to grace today’s female form that is not twig-like. Whilst we took some refreshments an elegant slim lady rode up on her motorbike. She could have carried off a mini skirt but instead, she chose black leather trousers.

Barcelona is charmingly chaotic. Pedestrians, electric scooters and cyclists blend in ill-defined cycle paths. But pedestrians are well disciplined and wait patiently for the green even when there is no traffic.

We hoped to try a nearby tapas bar that serves cheap Cava. When we arrived, there was a queue to come in. We wandered and eventually found a restaurant, Catalunya with OK food and good service. We took a digestive in another bar and saw the tail end of Barcelona versus Celtic.

Wednesday: We were at the Picasso Museum when it opened at 10 today. It is housed in a beautiful old building. It has a superb collection of work that traced his stylistic development. At age 15 a realistic large painting of a first communion to his later cubism. He was prolific and the exhibition has everything from sketches on the back of a postcard to his larger works. At precisely 12 we entered the Can Paixano bar when it opened. We were not alone, at least 20 others waited with us. Why, might you ask? The cheap Cava and excellent Tapas perhaps.In the afternoon it was the beach. A busy noisy beach where you are offered beer, water, mojitos or water every five minutes by walking sellers. A silly American girl smoked a joint surreptitiously and a Danish girl had a long lovers tiff by telephone that went in an endless loop. The sea was 17 degrees and Anna bathed.

Dinner this evening was planned to be in a nearby Tapas restaurant. It opened at 18:30 but when we got there we found that unfortunately, it was not until Thursday. We chose La Catalans instead. An expensive and excellent Rioja was consumed with Tapas that was not as good as we had eaten earlier. We wandered afterwards in the El Born area which was full of restaurants and folk. We ate ice cream which melted with alarming rapidity. A nightcap was taken sitting at the bar. The energy and concentration of the serving staff was impressive.

Thursday: There is a little cloud right now, but the forecast is for 23 degrees. We ambled along La Rambla and took in the Mercat de la Boqueria. It was fantastic but busy, so we decided against trying to have lunch there. We took a beer near the University with chattering students and children playing. Small green parakeets added to the cacophony. We found a little restaurant that was quiet, offered indifferent food but had a nice toilet.

In the afternoon we walked to Playa de Sant Sebastian. It was a mixed salad of naked sunbathers, athletic young people using parallel bars plus an African drum group. We stopped for Mojitos which took a long time coming. Dinner was in a wonderful bar Vaso de Oro. It was busy, noisy and served wonderful beer. Anna bought a new bikini. We ended the evening in a comedy club with an open mike session with stand up comics from Russia, India, Latvia and the UK. We laughed.

Friday: Barcelona has a lot to offer and mass tourism has accepted the challenge. They are back in force. As one of the comics said last night he is often stopped and asked the way to the sangria familia.

For the last 3 days, we have averaged over 18 000 steps. Today we were both stiff and not motivated to take more. We bought a hop on hop off bus ticket, toured the town sitting down and visited many of the remaining obligatory sights. We saw stylish areas of the town with wide boulevards, lots of plane trees and green areas. La Sagrada Familia is a beautifully ridiculous building that looks like a giant sandcastle.

This evening we walked to the beach and at 19:00 people still sat in beachwear whilst out at sea paddleboards paddled and sailboats sailed slowly in the sunset. We found last night’s beer bar where I enjoyed the best steak I have ever eaten served with deep-fried small tomatoes. On the way home, we stopped for a nightcap in our local bar. Beside us, 4 English people ordered pizza which arrived pale and tired. Thank goodness they could not mess up a Jamieson. 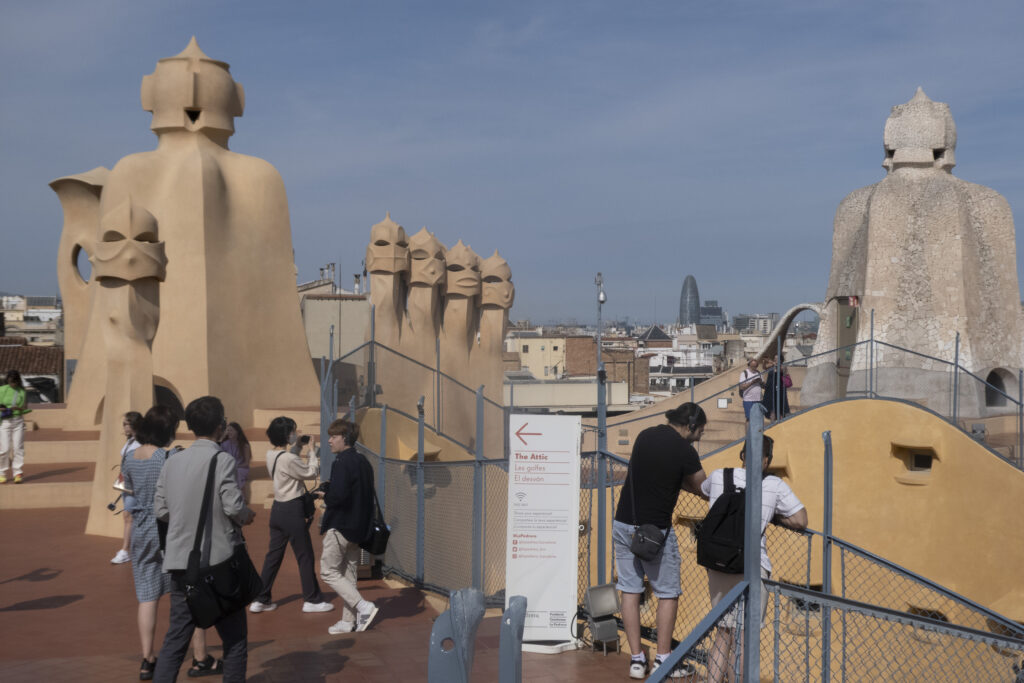